A new server backup wizard built on the Windows Server 2008 block-based backup technologies, which allows you to back up your server in minutes rather than hours

A redesigned Remote Web Workplace with new features such as custom links, logos and user to computer mapping 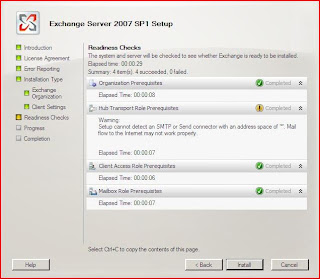 "Warning:
Setup cannot detect an SMTP or Send connector with an address space of '*'. Mail flow to the Internet may not work properly.".